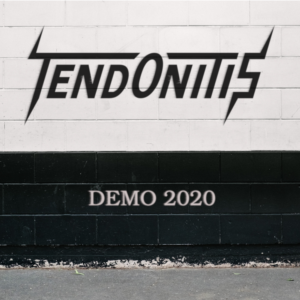 Some years have passed since the release of Stormreaper in 2016 and the split with longtime members Johannes and Dominik in 2017. So the band felt the need to give a sign of life to the community. The decision was to record a three track demo featuring the new band members Jan and Martin.

The tracks were recorded at the Mantra Studio in Adliswil in November 2019. Tendonitis wanted to add as much live-feeling as possible to the songs this time. Drums, bass, rhythm guitars as well as most of the lead guitars were thus recorded in a live setup and without any cutting. The vocal tracks were recorded during a separate session in the same studio.

To emphasize the pure live character, the release was not given a particular name. We just proudly present the Tendonitis Demo 2020.